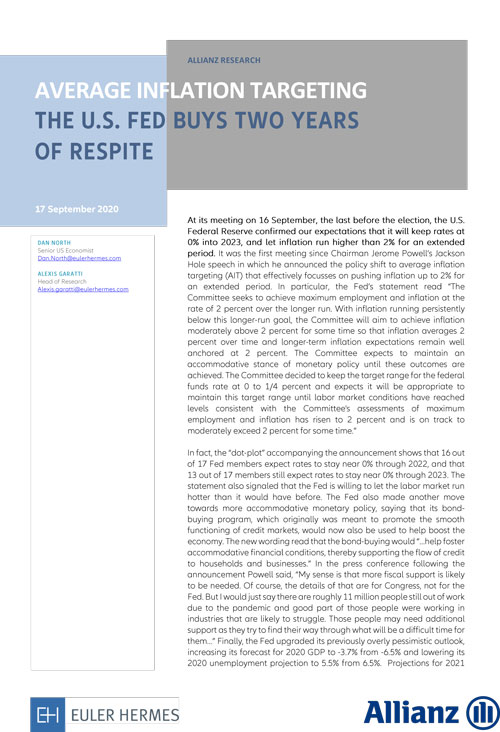 At its meeting on 16 September, the last before the election, the U.S. Federal Reserve confirmed Euler Hermes’ expectations that it will keep rates at 0% into 2023, and let inflation run higher than 2% for an extended period. It was the first meeting since Chairman Jerome Powell’s Jackson Hole speech in which he announced the policy shift to average inflation targeting (AIT) that effectively focusses on pushing inflation up to 2% for an extended period. In particular, the Fed’s statement read “The Committee seeks to achieve maximum employment and inflation at the rate of 2 percent over the longer run. With inflation running persistently below this longer-run goal, the Committee will aim to achieve inflation moderately above 2 percent for some time so that inflation averages 2 percent over time and longer-term inflation expectations remain well anchored at 2 percent. The Committee expects to maintain an accommodative stance of monetary policy until these outcomes are achieved. The Committee decided to keep the target range for the federal funds rate at 0 to 1/4 percent and expects it will be appropriate to maintain this target range until labor market conditions have reached levels consistent with the Committee’s assessments of maximum employment and inflation has risen to 2 percent and is on track to moderately exceed 2 percent for some time.”