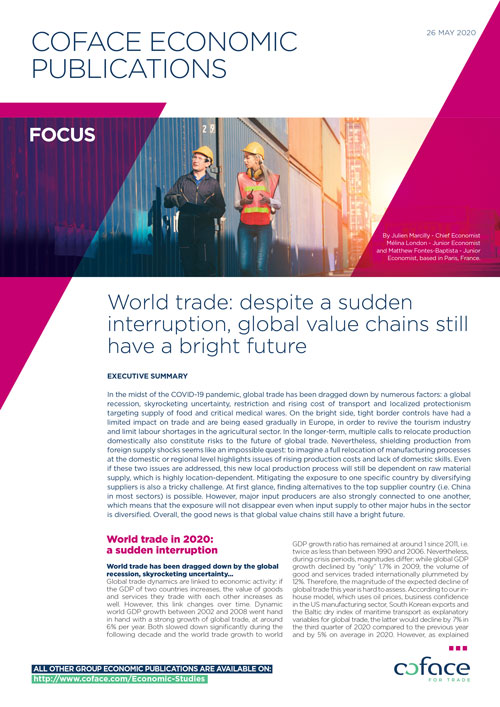 The global recession is expected to coincide with a sharp decline in international trade this year, especially as international trade tends to decline more than GDP in times of crisis. However, the extent of this overreaction is difficult to measure. The World Trade Organization (WTO) forecasts a 13-32% decline in world trade. This estimate indicates that all regions would suffer a double-digit decline in their trade volumes. According to Coface’s forecasting model – which uses oil prices, business confidence in the US manufacturing sector, South Korean exports, and the Baltic Dry Index as explanatory variables for global trade –  world trade is expected to decline by 7% in the third quarter of 2020 compared to the previous year. However, the outcome could be significantly worse as the usual correlation measured through linear models does not necessarily work in times of crisis. During periods of negative economic conditions, a sharp increase in uncertainty is one of the reasons for the overreaction of trade to GDP – today, however, this overreaction is at an all-time high.

Lower for longer: Covid-19 to weigh on interest rates